Death in the River Cam

The 28th of August must have been the worst day in the lives of two parents here in Cambridge as they received confirmation that their twelve year old son had been pulled lifeless from the river nine hours after friends had rung emergency services because he had not been able to resurface after jumping in from a foot bridge. Every parent hearing the news would immediately imagine the same thing happening to theirs and hug just a little tighter as kids went off to play in this last week of the summer break.

When the cold rains kept on and killed the spring, it was as though a young person had died for no reason. Ernest Hemingway - A Moveable Feast.  Mathematicians check the accuracy and validity of their work by starting with their solution and reversing the process. To reverse Hemingway's comparison somehow doesn't ring true to the loss of innocence and hope of what could have been. It doesn't acknowledge the mustardy guilt of not being there or the desperation at not being able to be everything for your child. Perhaps then this description of the disappointment in a strong winter is demonstrating the distant observation of a stranger rather than the blinding darkness of a parent who has lost their child.

All men fear death. It’s a natural fear that consumes us all. We fear death because we feel that we haven’t loved well enough or loved at all, which ultimately are one and the same. Script that Woody Allen put in the mouth of E.H in his movie 'Midnight in Paris'.
Perhaps also we fear death because we love too well - if we have nothing sacred to loose, separation holds no fear or regret. Our hearts thump, peripheral vision clouds as imagination creates worst scenarios until we see the foot poking out from under the clothing rack in the department store or hear the whoosh of txt. Some laugh, other's rant but all of us love.

My heart goes out to this family and the young boy's friends and all the parents who battle again the balance of independence and safety in their tween's lives.

Lord help us teach our children to swim - chuck them in the deep end and coach them - life is rarely an indoor pool, more a series of muddy puddles with the occasional waterfall or weedy river.

Just Read:   The Unlikely Pilgrimage of Harold Fry by Rachael Joyce, Black Swan 2012
A retired gentleman walks the length of England to keep a friend from dying of cancer. In this time of one foot after another he relives forgotten horrors and joys finally reconciling the grief in his life. A psychological mystery - the only deaths are choice and natural causes yet so much is presented to be unravelled.

" Harold thought of the people he had already met on his journey.  All of them were different, but none struck him as strange.  He considered his own life and how ordinary it might look from the outside, when really it held such darkness and trouble." p164

"Harold said something quiet about Berwick, and atoning for the past. He was unnerved by the very famous actor's confession and was still trying to find a place in himself in which to keep it." p195

Just Watched:  Midnight in Paris Written and directed by Woody Allen
A cartoon without animation for grown ups. Don't be put off the arrogant, selfish shallowness of the wealthy American family or the whinging of the daughter's fiancee, this movie is full of caricatures and isn't afraid to start the fun poking at the country of its birth. From the tinted scenes of every famous landmark in Paris, the audience is warned that what is coming may not be a reflection of reality.
We enjoyed recognising scenes from Montmartre that we have so recently walked and the way so many famous artists, writers and costume designers from past eras flickered across the screen. Willow had moments of existentialist crisis motivated by a fear of future mediocrity and Petal went to bed in disgust and missed Salvador Dali's Rhinoceros - she used to be a huge fan of surrealism. Perhaps the genre in film requires more years under the belt.

Woody Allen's driving thought presented itself near the end where obsession of an imagined golden time was chosen instead of love.  The reasoned words from the self actualising main character were "That's what the present is. It's a little unsatisfying because life is unsatisfying."  Mr Allen seems to be a discontented man.

The giant prat character that we all enjoyed despising was given these lines.
"Nostalgia is denial - denial of the painful present ... the name for this denial is golden age thinking - the erroneous notion that a different time period is better that the one one's living in - it's a flaw in the romantic imagination of those people who find it difficult to cope with the present." 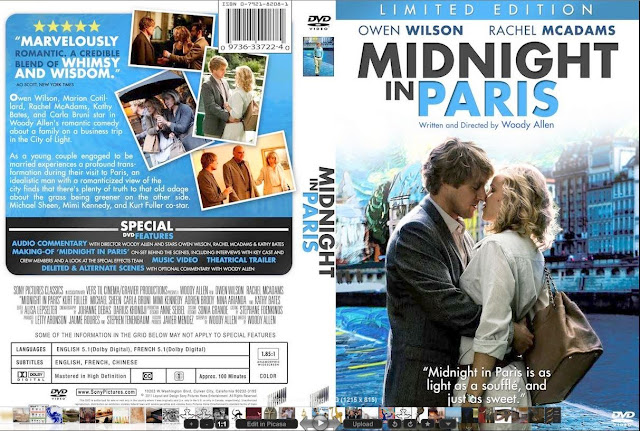