Hottest day for the new Heir 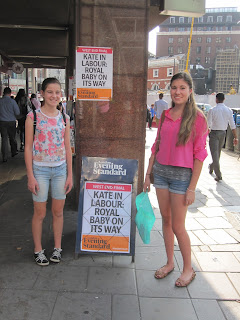 We love the London rail network. Willow overheard a French woman complaining how badly it measured up to the Metro in Paris but thanks to its colour keyed lines, excellent signage and free maps(although so small it is very difficult to read!) we never managed to go south when meaning to go north and thanks to the helpful station staff were able to find the stations nearest to the places we wanted to go. The only bad things that we noticed about it were the escalator stairs modeled on crocodile teeth that would break skin easier than someone grating carrot and the hour it took to get out to Watford Junction from Euston on an all stops 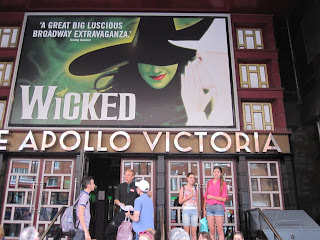 train though we did appreciate the cool air blowing at our backs..

Our first stop was Picadilly Circus where we visited one of the ticket booths and got tickets for Wicked at the Apollo theatre that night. If you have lots of different shows that you would like to see you're sure to be able to get cheap tickets for one of them.  If there is a specific show that you want to see you may have to book tickets months in advance to get a reasonable price. The costume, dance and music were a great introduction to the theatre scene.  Ice creams at intermission made up a little for the fact
that the only airconditioning was opening the fire exit at half time.

Rippley's believe it or not had a few very interesting displays and a ghastly human torture and capital punishment section. Luckily the school group sped through faster than we did and spent most of their time in the laser tag basement even so I was expecting a lot more bang for the big bucks it cost to walk down the five stories. The most interesting yarn was of some girl who let a helium balloon go with her name and number attached that landed in the backyard of another girl a couple of countries away that had exactly the same name, birthdate and range of pets. Ratio of photos to time spent is always a good indicator of interest. Rippleys got a big 1:85 score.

We went up Regent street as far as Hamleys Toy store which the girls thought would have been a dream come true a few years ago.  Their favourite section was the movie merchandise area with both of them looking longingly at the expensive replica time turner that Hermione Granger used to successfully save a couple of mythical characters. If only they were real! Although to quote Wicked "Don't wish. Don't start. Wishing only wounds the heart. (Elphaba) We stopped into Nandos for lunch which had a strange way of seating guests but with one glass let you fill it as many times as you could wish. Yummy Portobello mushroom and Halloumi burgers and chicken with sides enough to fill up two other hungry tums for 20 pounds in a cool basement room was a refreshing break from the streets of London.


Thanks to a handy map in the front of a Pitkin booklet called 'Must see, London - Top Attractions" that we found in the Westminster Abbey shop, we were able to find our way around without too much stress. All tickets to the 'attractions' are cheaper and fast tracked if bought online so it pays to have a plan before going in. As we walked past Madame Tussauds we saw a sign a third of the way down the queue to buy tickets that said '2hour wait from this point' whereas a family walked straight through the online booking queue space and into the display.

We had just come from the Sherlock Museum on Baker St where our decision to visit the shop and not the 'Museum' was based on the line for tickets and the following long line for entry to the museum.  The tickets were cheap but it was after all only a display about a fictional character. The shop was great but we did not give in to the temptation to take home a Cluedo game with the Cumberbatch series characters morphed into it. The 2nd season DVD did come home.

Walking down Buckingham Palace road we found a sweet shop called Charlie's which didn't make us think of the longest waiting royal heir. We bought an empty plastic jar labelled 'Charlies retro party jar' to put the puppy treats in ready for his arrival in August.  Of course we were heading to the Palace to see if the birth had been announced. Driven by the delight in being able to share this experience with Barney, our family's royal fan, we stood waiting and having hopes raised and dashed by helicopters, official black Limousines and staff knocking off work at five. The atmosphere was tense with a nice blind guy filling us in on everything he had seen over the last few hours which we saw more of in the one we stood there.  Cameramen rushed to and fro but the only really interesting thing that happened for us was when Willow recognised a friend from Sydney walking past. Photos and news was exchanged and then it was time to walk back around to the theatre with promises that we would come back and check after the show.

A kindly American tourist found the news on her phone in the interval of the bonny 8lb Prince's arrival and announced it to the people sitting either side of her loudly enough for us all to hear. Prince William had relayed the news to his Grandmother via encrypted phone and the news had been announced via twitter to the world. All I could find in the Sydney Morning Herald was that someone is suggesting he should be called Kevin! Still - back we wandered (holiday speed without M setting the pace) and Petal wriggled her way through the huge crowd with my camera in hand to get a shot of the notice.  Unfortunately she is her mother's daughter and turned the camera off instead of taking the photo. By the time she was back I was agreeing with Willow's lecture to me about how dangerous it was and that I shouldn't have let her do it so I wouldn't let her back in for another try. Sorry Barney! A photo of the crowd around will have to do.  Granny will be pleased to know that the police officers were calling warnings to people that thieves were about so we hugged our bags closely to our fronts.
Nana we have bought the souvenir papers for you but will remove from page 3 on from one of them to make it  lighter for posting!  The following picture is from the Royal Baby Souvenir mag that we have posted. 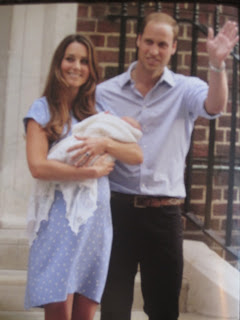 2nd May 2015
We were in London at Messy Church at St John's so missed all the palava in town.
Welcome to the world Princess.
Photos from - the newspapers on line - http://www.bbc.co.uk/news 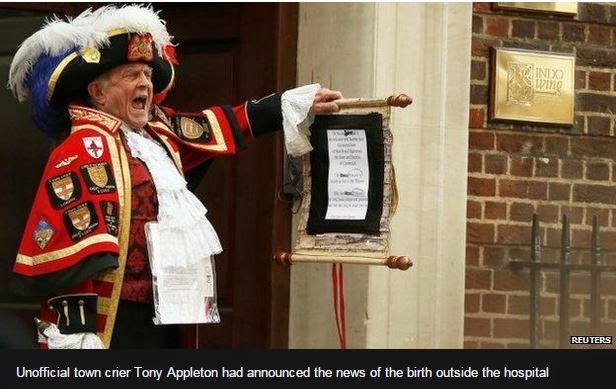 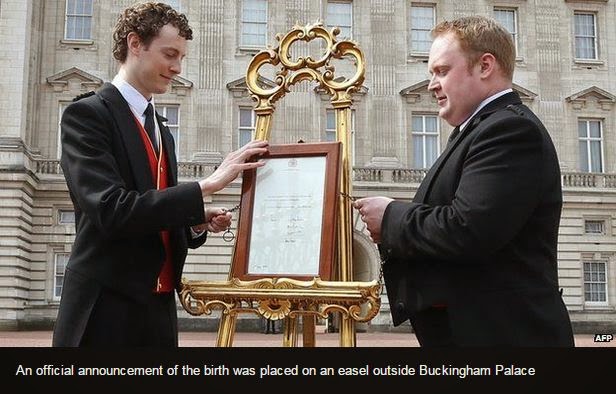 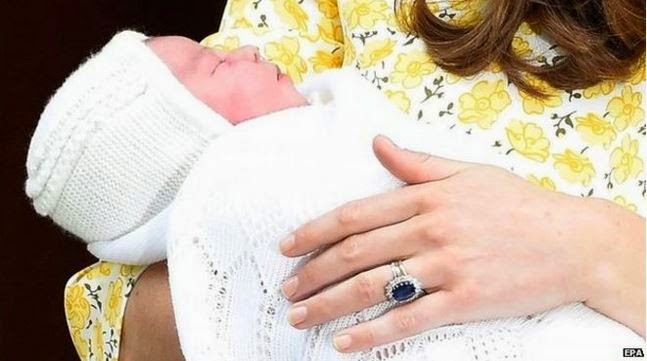 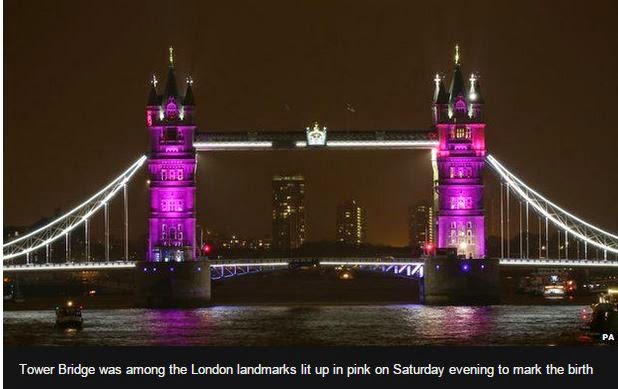 Reading Now:
Brick Road by Monica Ali
Set in a gritty London suburb ignored by the council in 2001 from the perspective of a Bangladesh bride sent to her husband from her village. A discussion of fate, philosophy and independence, of cultural expectations, bullying and liberation. A peek into the close world of women Muslim immigrants and the 'nothing to do' that poverty induces in teens.  An incredibly satisfying read of a clearly described physical and spiritual world beyond my experience.

'Anything is possible so everything I wanted was possible,' Chanu went on. 'But what about all the other possibilities? The ones we never see when we are young, but are there all along.  One day you wake up and say to yourself, I didn't choose this. And then you spend a long time thinking, but did. I? ....... The thing about getting older,' said Chanu, 'is that you don't need everything to be possible any more, you just need some things to be certain.'  p374

'Jorina said, 'But that is our problem - making lives for our children.  They want to make them for themselves.' p482

'She always asked for stories. She wanted the words because the words stitched her mother close.' p483