Best Ice-cream is in Cambridge

Jack makes ice cream and sells it from a bike borne cooler with an umbrella. His Lemon curd is quite possibly the best icecream I have ever tasted. - M chose it - a regular sized tub, even so the girls and I all only got one mouthful each of this delicious concoction! It is not made for sharing. No bitter lemon or fake yellow colouring just the perfect creamy balance of sweet and tangy with a fresh breath of a sunshiny afternoon with a good book and freshly mown grass.  Description a bit summer romance fiction maybe but man it was nice. Even M - a serious connoisseur of cold confection - suggested that it might be his new favourite.

I had a small tub of chocolate which was also great - just as good as the specialist choc cafe varieties.  The girls have a summer fruit sorbet which socked you in the mouth with an intense eye-watering, cheek sucking sour shock followed with a raspberry and strawberry melt.

We had just spent the late afternoon wandering around the University of Cambridge gardens, which cost 4:95 for non student adults to enter. The big trees, manicured lawns and ponds made us very nostalgic for the Botanic gardens in Christchurch.  A great place to spend a hot afternoon with a picnic under the broad branches of a non pine cone dropping tree.


Petal agreed to take a photo of Jack and his set up as we drove back past the entrance of the gardens but he had gone.  Luckily for us we spotted him pedaling his ice cream home so M pulled into a driveway to let Petal get a good shot as he pushed past. We discussed following him so we knew where to get more but Willow seemed to think that this was a bit creepery so we restrained ourselves. Hopefully we'll be able to find Jack somewhere around Cambridge again this summer. 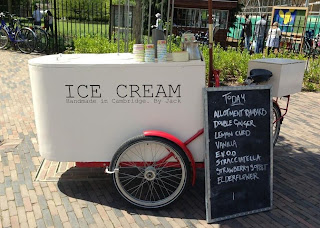 This guy even has a facebook page. https://www.facebook.com/JacksGelato  I have recorded this so I can check to see where he is setting up his trike next time - definitely stalking!
"Get fruity - and don't forget the veg!   One of Cambridge’s most popular ice cream vendors is Jack’s Gelato, owned by Jack van Praag, who began his business in 2010. Jack can usually be found outside the Botanical Gardens, or on Grantchester Meadows, selling from his vintage tricycle.   Jack uses ingredients such as organic milk, fair-trade sugar and fruits, herbs and vegetables from his own allotment. He works hard to develop his flavours and says: 'I once made sixty different versions of a chocolate flavour to find the right one!'  Some of his most interesting flavours include Elderflower, Earl Grey, Crab Apple, Mulberry, Cobnut and foraged Fig Leaf.     ‘I would like to introduce vegetable sorbets to my range and would also like to open my own parlour, ’ he says, adding that his gelato is also on the menu at ‘Nord’ in Cambridge. -
See more at: http://www.localsecrets.com  written by Maria Hopwood"
After reading these and other pages I don't think that the guy in our photo is Jack - maybe a student on a holiday job.

Addition - 31.8.13 - Just had a cone of turkish delight from the kiosk on the riverbank down from the tennis courts at the end of the cycle bridge from Chesterton Road.  Easy walk from town and a wonderful place to sit in the late summer sun.  One of the silver disks in the middle of the grass, which Willow thought were part of a sculpture, made a comfy seat. Rosy, chocolate delight!

Have read:
Vivien's Heavenly Ice Cream Shop by Abby Clements.
A holiday read - put rational thought aside for the relationship issues! Interesting comment on how the step mum adjusts to the lose of the partners kid when he goes back to his ex wife. Really enjoyed the description of Florence around the ice cream making classes. A few interesting family dynamics and a great example of how to pull communities together through a love of ice cream!

Azur Like It by Wendy Holden 'Cannes life be this Nice'  I think the cover script gives quite enough detail of the tone to be found between them.
Posted by Che at 03:14