Looking at the map I couldn't work out why Ely was called an Isle, there are plenty of lakes around the Fens but I was expecting at least a giant moat on the approach from Cambridge. After an instructive video about the draining of the Fens I now know why.

We passed a sign for the 'Maize Maze' on the way and this wouldn't have been possible without generations of Brits and Dutchmen using the latest technology available to turn swamp into fertile plains. No wonder by the time they got to Christchurch they knew what to do. The Duke of Bedford hired Dutch ditch diggers in the 1600s after a failed Medieval attempt in the 1400s. The local populace revolted because he promised a third of the reclaimed land to the Dutch if they succeeded. The locals liked splashing around with the ducks and had worked out how to live a fairly free and easy life in a large place that nobody else wanted. In the 1700s windmills were introduced to pump out the water because the drained peat had shrunk along way beneath the banks of the drains and many men spent their entire lives dredging the water ways. The industrial era saw steam pumps introduced and there was even a poem written to celebrate the flood being fought by a form of itself.

Ely was built on a patch of high land in the middle of the Fens(swamp). The Cathedral is built on the highest part of this patch and its spires stand above every other building. The ceiling paintings are amazing, they were replaced by two Victorian artists after the cleansing of the idolators at the time of Henry's dissolution of the monasteries etc. 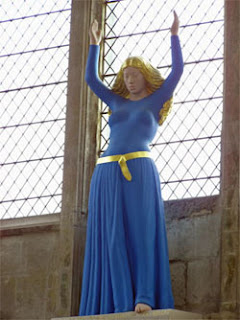 We went to Evensong in the Ladies Chapel. It had been completely stripped of all its murals and stained glass during the dissolution as it was a shrine to the 'Queen of Heaven'. Businesses are named along lower panes of new windows that have contributed to the refurbishing of the chapel. There is now a covered and beautifully glassed passage from the main church to the chapel, the stained glass has begun to be replaced and there is a very modern looking altar and sculpture of Mary up the front. She must have been made in the 70's for she has long flicked back Farrah Fawcett type yellow hair and is posed with her hips thrust out, hands up in a bit of a disco move and has an expression of dazed ecstasy. She has on a bright blue Lady Macbeth number with a golden girdle though not solid gold dancing pants. Above her are ceiling paintings of red roses and in the centre is a little bright blue dragon - obviously the cleansers couldn't reach that high.

Evensong was sung by the choir and the priests and was quite beautiful. One piece, the Magnificant(not a sp error!) was exceptional. The old chants and tunes are timed to perfectly take advantage of the echoes in these old stone chambers, just as a note dyed away the next phrase would begin. The counterpoint trills and melodies between the four groups of voices was exquisite, maybe the choir was practicing this piece when sculptor was working on Mary's face!

A house that Oliver Cromwell inherited and lived in for some years had a museum in it and St Mary's church on its doorstep. Here he became an MP and started down the political, religious trail that would end with his body being exhumed, hung and beheaded when the Stuarts were restored to the Kingdom.

The Museum was very pro Cromwell and celebrated all the good things he did(including draining the Fens). They argued that although he and his family didn't celebrate Christmas because it was a pagan renewal and people lost all self discipline and godly behaviour during the 12 days of celebration, that is was Parliament, not him as Lord Protector head of Parliament, that banned Christmas in England. At the beginning he fought for an economic policy to ensure the equal share of wealth amongst England's citizens and freedom of beliefs. The Jews were allowed back in and even thought the Roman Catholics were frowned upon with their extravagant fripperies they weren't persecuted. Unfortunately the round heads sapped the joy from the kingdom, corruption rose its ugly head and after Cromwell's son Richard was forced to abdicate(no really they didn't accept the crown!) the Stuart's were once again on the throne. Lace was back in style and all the shiny statues that had been hidden away were polished up and put back into the churches. 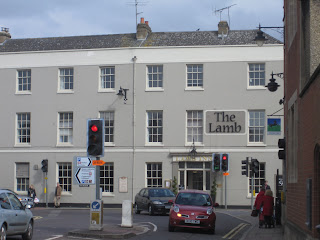 It is 7:30 in the morning and bells from various churches have been dinging away for the last hour or so in fits and spurts - no need for the wake up call offered by 'The Lamb'. The rooms are above the old stables and twist around through narrow corridors as they mirror the floor plan below. We (Michael would say I, since I was leading) got lost. At the end of the last corridor was room 12 and we had a key for 14. There was no 13 and we had missed a little hallway and step way back that led to rms. 14 - 16. After creaking though tight twists and turns we finally found the room dumped our stuff and went out to stroll around this Cathedral town.

Reading Now: A Little History of the World by E.H.Gombrich, son of the author of 'The Story of Art'
About 10 pages on different major periods of History. He begins with prehistory.
"Just so that 'Once upon a time' doesn't keep dragging us back down to the bottomless well, from now on we'll always shout: 'Stop! When did that happen?' And if we also ask, 'And how exactly did that happen?' we will be asking about history. Not just a story, but our story, the story that we call the history of the world." p4