Westminster Abbey is an altar to English history and politics as much as it is to God.
From the time of William the Conqueror's coronation there on Christmas day 1066, England's monarchs have followed suit. He was heir to Edward the Confessor who began the building of the Abbey and who was buried here. Many Kings and Queens of the realm, along with those rich enough to buy space when it was for sale and some of England's genius' are buried here too. 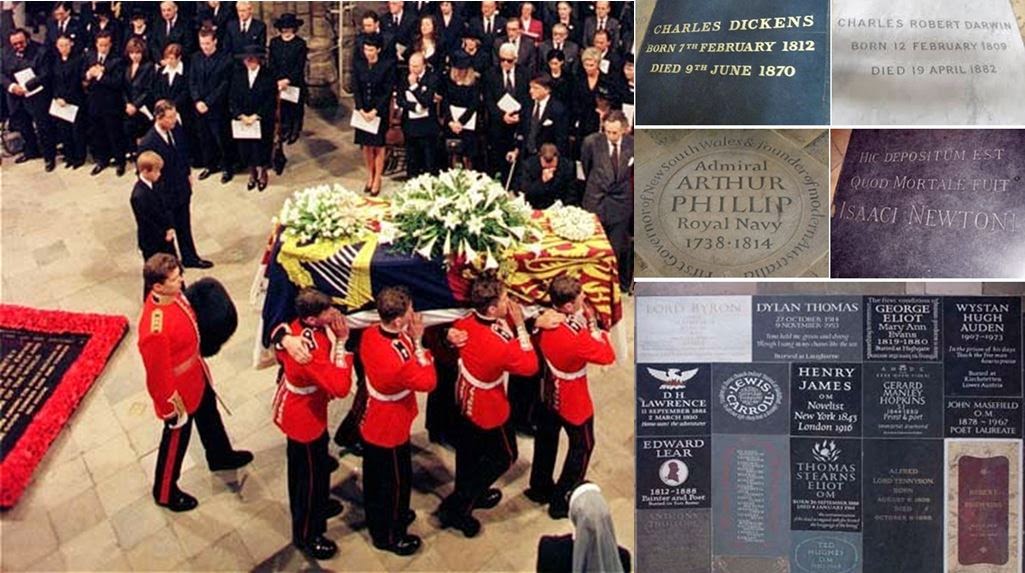 So many famous people have been buried here. The only grave visitors are not allowed to stand on or walk over is that of the unknown soldier; even Lady Diana's funeral procession went around it. It is always surrounded by the red poppy border.

M was a bit stressed as people stepped on Charles Dickens and Sir Issac Newton though.

Apparently one of the biggest funerals ever in the Abbey was that of Charles Dickens - the poor and under-trodden from all around the country came in their rags to leave flowers at the grave of the voice that shared their plight and developed a social consciousness in an age where poverty was still seen as a reward for lack of moral development.

I didn't realise that the first governor of NSW had been buried here. I was in the middle of teaching the Ted Hughes sophisticated fairy tale "The Ironman" so I shared this photo with my Yr 6 class to show where the Poet Laureate had been remembered. I wonder what Lewis Carroll (real name Charles Dodgson) found on the other side of this rabbit hole. The circular design of his memorial is an allusion to his most famous work. An inscription reads "Is all our life then but a dream?" This reminds me of Queen's Bohemian Rhapsody for some reason: the place of Freddy Mercury's (birth name Farroch Bulsara) remains are still a mystery, he certainly isn't cossied up with Purcell at the foot of the organ stairs or Handle, perhaps he should be! No mum, I'm not implying that 'Play the Game' or 'Someone to Love' are comparable to 'The Messiah'?!
The Abbey has the title 'Royal Peculiar' because the church is answerable immediately to the Queen (or King) rather than to a Bishop. The person in charge of the church is called a Dean.
The Abbey has changed shape many times with rebuilds and renovations. Edward would not recognise it at all. It ceased being an Abbey during the dissolution but Henry VIII's daughter - Mary, returned the monks along with the old religion. Elizabeth I cleared them out again and it has remained a singular blip in the Church of England catergorisation methods ever since. As big as a Cathedral but not named as one. St Pauls holds this title in London.

The building is quite overwhelming, with chapels and gated rooms budding off the main spaces, each with plaques or statues in memorial of human names or remains.  The enormous circular chapter house where the monks would carry out their job of copying tomes or recording business is beautiful but empty. It is said a door in the entry to this space is the oldest in Britain. There is a museum in one of the rooms with the coronation chair on display which proudly shows all the punishment of being the oldest English artifact in continual use. One young altar boy carved his initials and the date which he slept over in it. It has been chopped and nailed, stained and restored but will be used again when the next king is crowned.


It was good to get back outside again - away from the weight of so much dead and unconnected history. Nevertheless; Westminster Abbey is an absolute must on any travel itinerary of London.